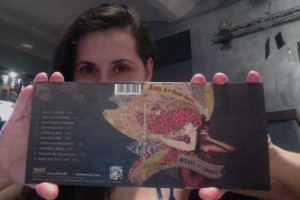 After much work, and time, I can finally announce that the new Ashia & the Bison Rouge album ‘Diesel vs Lungs’ is finished! I just received the physical CDs from the JARO Record Label & they are gorgeous!
That means I will start organizing all of the Kickstarter donor orders {finally!} and sending them out in August. I’m very excited to start to work with JARO Median because I was looking for a team to help with booking shows, concerts, and publicity. They also will help with Central/Eastern European countries, which is my soul’s calling to perform in and write about.
The album will be released independently in the US. Since, most of the Kickstarter donors are from the US, I wanted to honor staying independent on that side of the pond. I’ll be sending the digital download of the album soon to the Kickstarter donors, as well as organizing to send out the CD and packages once I have it in hand! We will celebrate the album release September 25th in Bremen, DE and November 14th in Portland, OR with more show dates to come!